It had been recognized for some time that the sense qualities of color, sound, taste, and so forth, do not belong to the objects that are sensed but to the mind which perceives the objects. At the same time, it was generally assumed that spatial characteristics and such items as size, weight, and density are present in the objects which constitute the material world.

Locke followed the customary practice of designating the qualities that belong only to the mind as secondary and those that belong to the objects as primary. Recognizing the difficulty that is involved in knowing anything at all about the real nature of that which is external to the mind, he assumed that, whatever its nature might be, it was capable of acting on human minds and causing the sensations that are experienced.

Having accepted the empirical method as the only reliable one for an adequate understanding of the phenomenon of human knowledge, Locke was led by the logic of his position into a kind of subjectivism.

This means that one may have genuine knowledge about only the workings of the human mind, and consequently no positive claims can be made about the nature of that which lies outside the sphere of consciousness. This may seem to be a strange position for him to take since the scientists whose methods he was attempting to follow always considered that they were studying the material world and not merely the appearances which it produced in human minds.

Locke's major contribution in this respect consisted in shifting the emphasis from a study of nature to a study of the mind and the processes by means of which knowledge of any kind is obtained. In doing this, he achieved a measure of success, for he was able to give some account of the way in which ideas are formed even though he was unable to present any empirical evidence for assertions concerning the nature of that which is external to the mind. It is obvious that the logical outcome of Locke's empirical method could be nothing other than skepticism insofar as the real nature of the external world is concerned.

While it is true that Locke continued to believe in many of the basic assumptions of the scientists of the seventeenth century, he could provide no evidence from human experience to support their validity. He believed as ardently as any of the scientists that there is a rational order in nature and a cause and effect relationship which holds good for all observed phenomena.

But since these beliefs imply more than the facts of experience, we may have faith in their validity but we can have no certain knowledge concerning them. Because the term knowledge had been used in a way that implied certainty, Locke was forced to the conclusion that we can have no genuine knowledge about nature.

An essay concerning human understanding : abridged, with introduction and notes

All that we can have is probable knowledge. This conclusion he did not think should cause any alarm, nor should it be disturbing to any thoughtful person. Probable knowledge is, in many areas at least, reliable knowledge, and as such it is sufficient for our needs.

Since this is true, we ought not to bemoan the fact that our minds are limited. Rather, we should learn to make use of what capabilities we do possess.

The only certain knowledge that we have is the kind which is illustrated in the field of mathematics, where the test of truth is the consistency of our ideas with one another. But this type of knowledge does not tell us anything about the world of nature, nor does it give us truths in the areas of morals and religion. Removing book from your Reading List will also remove any bookmarked pages associated with this title.

Are you sure you want to remove bookConfirmation and any corresponding bookmarks? Sign In. Pop Quiz!

In the six years following his return to England he published all of his most significant works. To discover truths beyond the realm of basic experience, Locke suggested an approach modeled on the rigorous methods of experimental science, and this approach greatly impacted the Scientific Revolution.


Rejecting the divine right of kings, Locke said that societies form governments by mutual and, in later generations, tacit agreement. Thus, when a king loses the consent of the governed, a society may remove him—an approach quoted almost verbatim in Thomas Jefferson 's Declaration of Independence.

Atheists whose oaths could not be trusted and Catholics who owed allegiance to an external ruler were thus excluded from his scheme. He died there on October 24, , as Lady Damaris read to him from the Psalms. But if you see something that doesn't look right, click here to contact us! Subscribe for fascinating stories connecting the past to the present. Jay served as the key John Rolfe arrived in Jamestown along with other settlers in , as part of a new charter organized by the Virginia Company.

In , John Dillinger was born June 22, , in Indianapolis, Indiana. As a boy he committed petty theft.

In he robbed a grocery store and was caught and jailed. He escaped and he and his gang headed to Chicago to put together one of the most organized and deadly bank robbing John C. 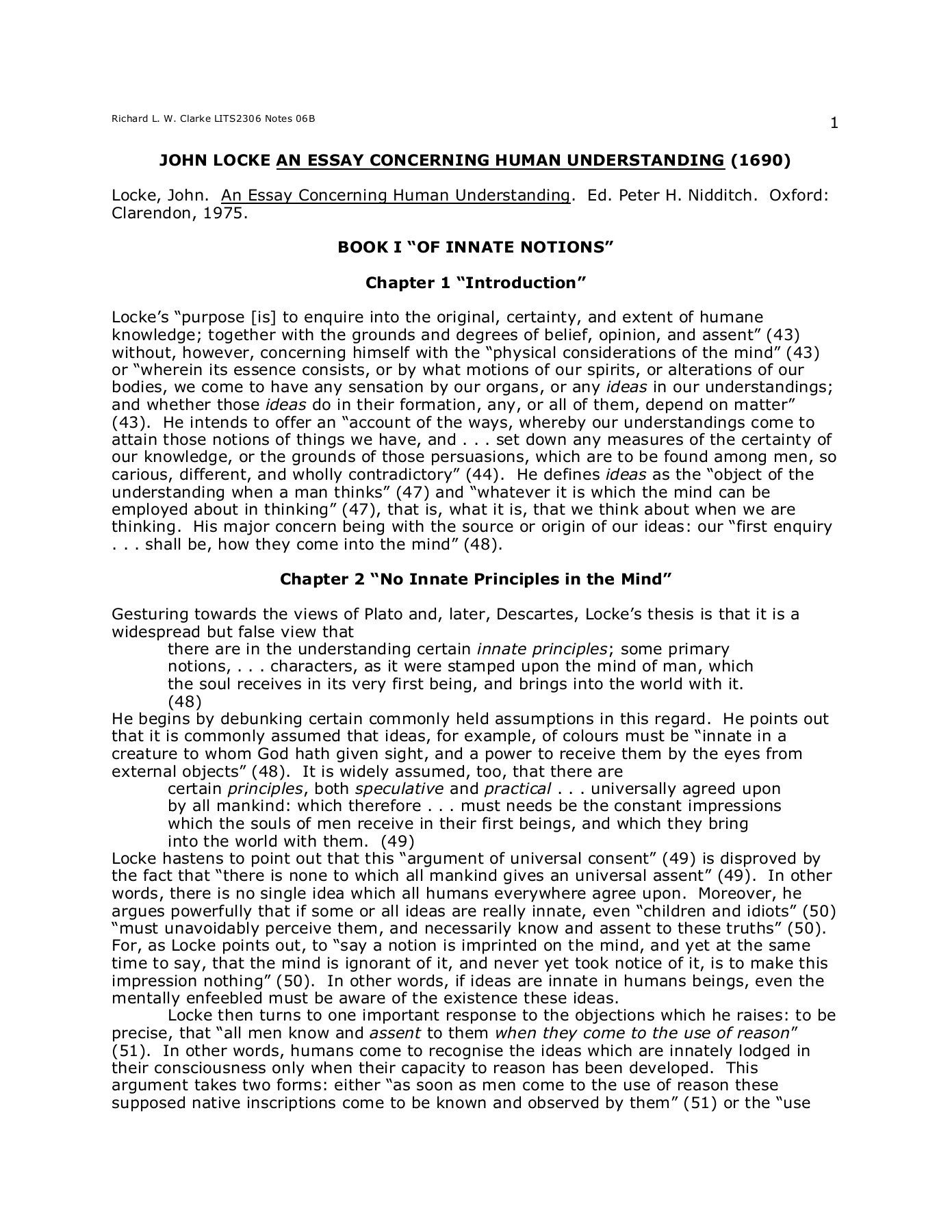 The existence of innate ideas, which are already in place at birth, was fundamental to the logic of Cartesian rationalism. This logic proposed the existence of ideas which exist independent of both perception and experience. Therefore, they had to be considered essential and universal truths that could only exist by virtue of agency the individual mind on which they were imprinted. Since innate knowledge could not be gained through perception or experience, the only logical conclusion to explain their existence was they were put there by a perfect supreme creator.

Only through experience can knowledge be written upon that slate. The systematic undermining of the theory of innate ideas first targeted the weakest pillar of its support: it must be true because there is universal agreement that it must be true. An Essay Concerning Human Understanding proceeds from this point toward a methodical dismantling of the principle of non-experiential knowledge using the most basic of empirical evidence. How can ideas like a circle being round and that 2 plus 2 equals four be considered innate, his essay, asks, when every child must be taught these thing before understanding them?